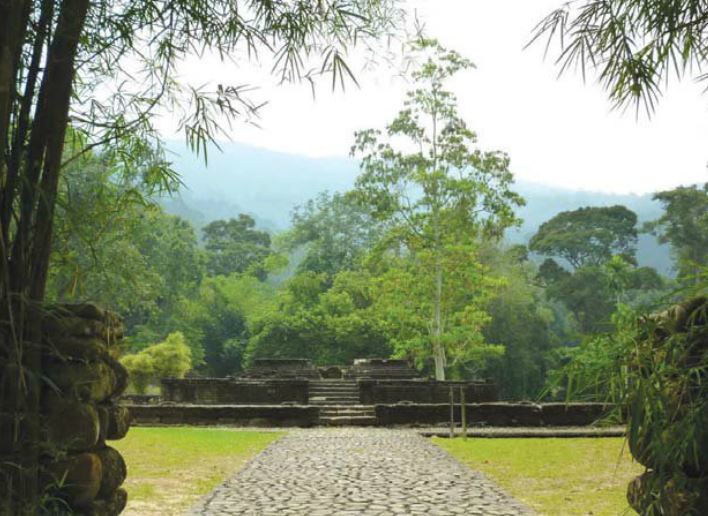 The total silence at Bukit Batu Pahat (Batu Pahat Hill) in Mukim Merbok, Kedah, save the whisper of the gentle wind, belied the fact that the place was once part of the busiest trading centre in Southeast Asia. Nonetheless, this hill which is located at the foot of Mount Jerai has become a silent witness to the 1,500 year old history of the Old Malay Kingdom centred in Bujang Valley.

This prosperous ancient kingdom had a mixture of various civilizations with a colourful combination of culture and traditions of the locals (Malays), Indians, Chinese, Srivijayan, Khmer Empire and West Asia.

It also had many names. The ancient Indian poet from the 2nd century A.D. called it Kalagam or Kadaram. To the Arab traders in the 4th century A.D., it was known as Qalha or Kalah. The famous Chinese traveller, I-Tsing, who visited the kingdom in the 7th century A.D, named it Chieh-Cha. In the Hikayat Merong Mahawangsa, an ancient Malay literature, it was known as Langkasuka. Bujang Valley which spreads over 450 sq kilometres was the centre for international trade and shipping passing through the Straits of Melaka. It stretched from Mount Jerai in the north to the Muda River in the South and the Straits of Melaka in the west.

It was the imposing peak of Mount Jerai that first captivated the travel weary traders from the Far East to anchor at Bujang Valley. After travelling for months in the high seas, the 1,217 metre Mount Jerai must have been a welcoming sight for the seafarers. By the 7th century, Bujang Valley had evolved into a flourishing entry port. It was also the first port in Southeast Asia – via its sea route – to link an alternative route to East and West Asia. This route was known as the Spice Route. It offered an alternative to the Silk Road, which connected Chinese and Far East traders by land. The valley continued to prosper until the emergence of the Sultanate of Malacca in the early 15th century. Now, what remains of their once magnificent empire can be found in the candi or temple ruins that dot this sprawling historical complex.

THE CANDI (TEMPLES) OF BUJANG VALLEY
In the 1840’s two surveyors found a ruin of a candi (temple) on top of Mount Jerai. Subsequent researches and archaeological discoveries proved that the area around the foot of the mountain was an ancient city that prospered between the 3rd and 12th century.
Since the discovery of the first temple, more temple ruins have been found. To date, a total of 50 temples have been reported. Some of them have been partly reconstructed or relocated and some remain at their original sites, still open for new discoveries.

Though it was first discovered over a century ago, Bujang Valley still holds many surprises for researchers. The temples found indicate strong Hindu and Buddhist influences, prompting early researchers to believe that the area was colonised by the Indians. However, recent analyses refute the earlier theory and suggest that before the arrival of Indian traders, there was already an established civilization in Bujang Valley and that the temples were built by the Hindu or Buddhist traders. Further researches also indicate that the local people who built the temples did not actually embrace Hinduism or Buddhism as was previously believed. Instead, they were merely hired by the visiting merchants.

CANDI BUKIT BATU PAHAT
The biggest and most significant temple in Bujang Valley is Candi Bukit Batu Pahat. Located on the east side of Batu Pahat River about 3km to the north of Sungai Merbok Village, the temple was excavated and reconstructed in the late 1950s. It is believed to have been built during the 11th century A.D. Among the ruins found here is a temple dedicated to the Hindu god, Lord Siva. The temple is believed to be built of granite and wood and has 66 round bases where the wooden poles used to be. The artefacts found here comprise eight closed reliquaries with nine chambers containing jars, beads, and gold foil in various shapes. The bronze artefacts include a statue pedestal and a trident belonging to the god Siva. Other artefacts found were ceramic shards and iron nails. In 1960, the temple ruins were reconstructed at its original location with expert help from Universiti Malaya, Kuala Lumpur, and the Angkor Wat Conservation Centre, Cambodia.

CANDI PENDIAT
This temple was found on the left bank of the Bujang River in Kampung Pendiat, Mukim Merbok, in 1936 and was excavated in 1974. It was believed to have been built during the 9th century A.D. The temple ruins were relocated and reconstructed at Bukit Batu Pahat in 1974.The main building was made of laterite blocks, loose laterite and bricks. Granite was used to make the pillar bases. Artefacts found here include a bronze reliquary containing gemstones, a golden bowl and various animal shapes such as a golden lion, a silver bull and a copper horse. Other finds include bronze artefacts such as a bell, two lamps, a finger from a statuette and an aureole.

CANDI BENDANG DALAM
The temple ruins were originally situated at Kampung Bendang in Mukim Merbok. It was found in 1969 and was excavated in stages between 1974 and 1982. Based on the data, it was believed to have been built during the 12th century A.D. The Candi Bendang Dalam was relocated and reconstructed at Bukit Batu Pahat in 1983. This temple was mainly built of laterite blocks as well as loose laterite. Other materials include bricks, river stones and granite. Artefacts found at the temple comprise ceramic shards, Middle Eastern glass, charcoal and resin.

CANDI PENGKALAN BUJANG
Candi Pengkalan Bujang was originally situated on the left bank of the Bujang Valley River, at Kampung Pengkalan Bujang in Kuala Muda. It was found in 1936 and excavated in 1976. The temple ruins were relocated and reconstructed at Bukit Batu Pahat in the same year. The data collected showed that the temple was built during the 11th century A.D.
It was built mainly of bricks with pillar bases chiselled from granite and a roof made of tiles. Artefacts found at the temple include a terracotta Buddha statuette, a terracotta elephant statuette, a terracotta Boddhisattva statuette, a bronze statuette possibly representing the goddess Bhrkuti, a gold ring, earrings, bricks inscribed with Pallava letters and marked with animal footprints, ceramic shards, iron nails and beads in various colours and shapes. This temple was believed to possess a stupa (a dome-shaped monument), used by ancient Buddhists.

Walking between the reconstructed temples at Bukit Batu Pahat is like walking through time and space. It makes one wonder about the ancient community and their lifestyles 1,500 years ago. Perhaps with a little imagination, one would be able to smell the faintest whiff of spices that were traded among the foreigners or hear the strange and ancient languages they uttered. But for now it was enough to get to touch the same stones and walk through the same fields they did many years ago.

BUJANG VALLEY ARCHAEOLOGICAL MUSEUM
In the vicinity is the Bujang Valley Archaeological Museum, an important museum that showcases various artefacts found around the valley such as earthenware, Hindu and Buddhist idols, tools and jewelleries. There are about 1,000 artefacts exhibited with over 2,500 more currently being studied. The surrounding area itself is rich with evidence of the ancient civilisation including stone tools and ancient machineries.

The museum gallery displays archaeological artefacts that serve as evidence to the existence of Bujang Valley and its glorious days as the oldest centre of international and entry port trade for Malaysia. Among the artefacts include pottery and ceramics shards and stoneware which date back 1,500 years. There are also Chinese porcelain, stone carvings, Indians tridents and gemstones from the Middle East on display. Among the facilities at the museum are a cafeteria, public toilets, a book store, a car park and recreational area.

If you are interested to visit this place, you must contact the District Forestry Department for arrangement at 04-4572005